Example of use: How to get video from one side of the building to the other ?
There are various ways to do this however the must cost effective way is to use the Pro Convert H26x to HDMI 4K; Once your main PC is set up to stream the video via the Magewell Bridge to NDI, Newtek NDI Tools or other compatible software then simply plug the device into an ethernet port and on the other side to a HDMI TV or projector and that’s it!  The device can get both the video data and power from the ethernet port (with POE) or you could power it up with a USB cable from a PC/laptop or a phone charger. In addition to recognizing and displaying both H.264 and H.265 streams, the Pro Convert H26x to HDMI 4K can also decode video in various formats such as: RTSP, HTTP, RTMP, UDP, SRT, RTP. So really, this is the ideal device to display live H.264 or H.265 streams anywhere with an ethernet connection. 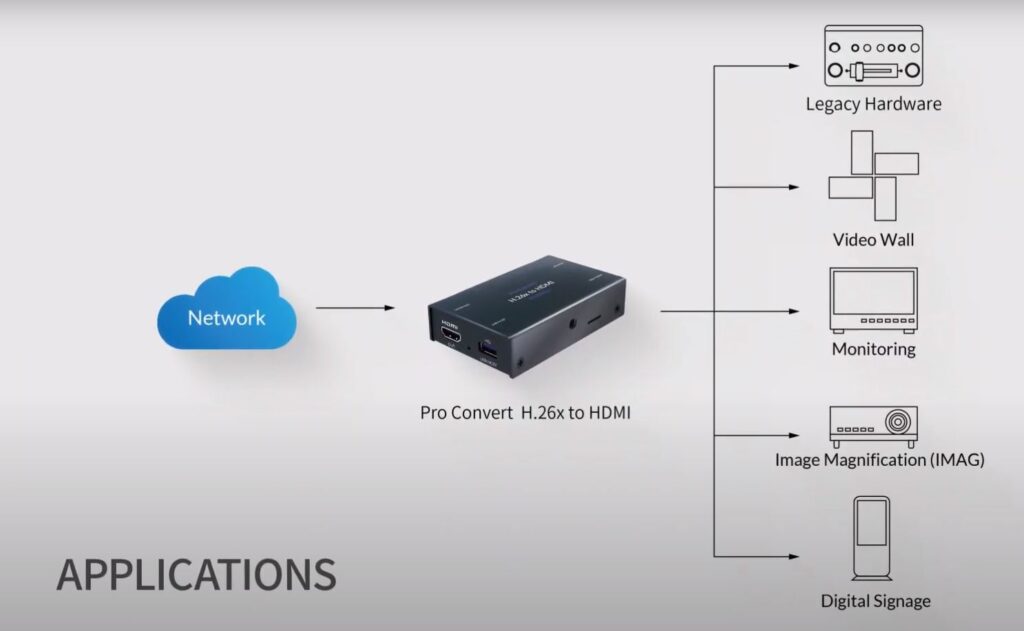 Magewell Pro Convert decoders are designed for applications including multisite video distribution, monitoring, image magnification (IMAG), digital signage, remote production, or bridging legacy and next-generation media infrastructures. The Pro Convert H.26x to HDMI 4K decodes streams up to 4096×2160 at 60 frames per second for output over its HDMI 2.0 interface. Built-in, SoC-based video processing enables the device to automatically up-convert HD or 2K source streams to 4K for viewing on Ultra HD displays. The plug-and-play decoder features DHCP-based network configuration and can detect the video and audio characteristics of the target display device via EDID metadata, automatically optimizing output parameters or providing the user with a range of compatible choices.