Magewell Pro Convert HDMI TX NDI Encoder allows you to convert an HDMI signal with embedded audio to an NDI stream. It supports resolutions up to 2048 x 1200 at 60p on both input and NDI output. The device can be powered via an included power adapter or over PoE using the NDI port

Pro Convert family of NDI encoders, built on NewTek’s extremely popular NDI media-over-IP technology, help users reliably bring traditional video signals into IP-based live production and AV infrastructures. Available in 4K and 1080p60 configurations with a choice of input interfaces, the converters enable users to easily and cost-effectively connect their existing equipment into NDIenabled networks. The ultra-compact Pro Convert devices are ideal for both in-studio and portable field use. Value-added features for live production applications include a 1/4″-20 thread for standard camera-mounting accessories, preview and
program tally lights, and NDI-based PTZ camera control. The units can be powered by the included AC adapter or via Power over Ethernet (PoE) for further deployment simplicity. 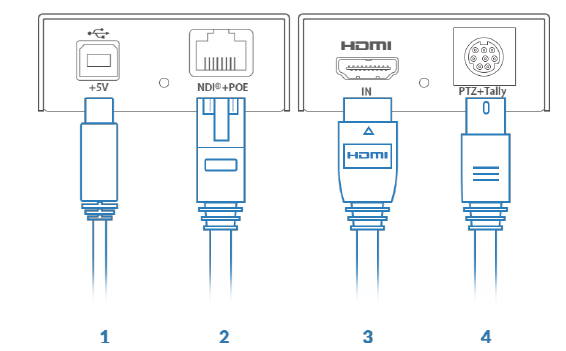 The Magewell Pro Convert HDMI TX enables users can control advanced settings, select between NDI source streams and monitor the status of the decoder through a browser-based interface; wired or wireless keyboard or mouse; or using two on-device buttons that overlay an intuitive menu on the HDMI output. The device supports eight channels of audio in the NDI stream, with user control of audio gain, sample rate, channel selection and on-screen VU metering. Additional convenience and integration settings include image flip for inverted projector installations; safe area controls for ensuring the display of important content; and remote control of PTZ source cameras.